The APCP have reviewed exercises commonly used by football teams and have adapted these exercises to be used by frame football athletes.

The game of Frame Football has spread rapidly since 2014. Identifying a gap in provision, in February 2014 Cerebral Palsy (CP) Sport undertook extensive research around the concept of Frame/Walker Football to support people who use a walking aid such as a frame of crutches to participate in a format of football which is tailored to their needs. In June 2014 CP Sport held a Frame/Walker Development Day at the Football Association’s National Football Centre at St George’s Park.

The Frame Football Development Group is the coordinating body for Frame Football in England and Wales. Its objectives are to ensure that Frame Football is practised consistently, safe and player focused, thereby enabling every person to fulfil their potential.

New research released in November 2017 by Cerebral Palsy Sport highlights the importance of their adapted sports programme in supporting people with cerebral palsy to be more active. The results confirm that adapting sports by modifying rules and equipment can enable and encourage more people to take part and enjoy sport and physical activity. The report is titled CP Sport: showing the benefits of adapted sports. 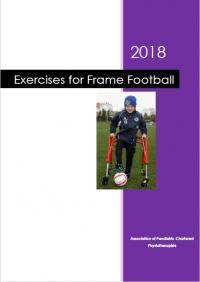